This time around we find some rather odd labor negotiations, we see Jacob up to his old tricks again using sympathetic magic to make himself rich (or maybe not), we have some fun at the expense of two thousand years worth of Bible commentators, and finally we witness a treaty that stood meaningless for a millennium.

Who knew one could so readily find inspiration for a blog post about apostasy in the lyrics of a Taylor Swift breakup song? If the oft-repeated marketing slogan of "Christianity is a relationship" has any truth to it, then apostasy is a lot like a breakup. Maybe that's why I often find myself relating to the sentiment of breakup songs. Lines like "since you been gone, I can breathe for the first time," or "so often times it happens that we live our lives in chains and we never even know we have the key" resonate with my experience. I find this to be the case with the aforementioned T-Swizzle ditty.

Let me clarify a bit before I confuse the reader. See, on my end I hold open the possibility that some form of Christianity may indeed one day somehow seduce me to return. I admit that it seems highly unlikely, but I'm not ready to say "never." The brain is a very curious and often fickle organ, susceptible to all kinds of things. Injury, delusion, hallucination, chemical imbalance, narcotics, or any number of things can completely alter cognitive processes. Not to mention the growing list of cognitive errors everyone remains susceptible to. And who knows? Maybe some form of Christianity has it right and I will discover this and become convinced of its truth. Maybe I'll reach a point where it just doesn't matter to me whether or not it's true and I embrace some iteration of it. I consider all of those things possible. I'm talking about what the Bible says, and the Bible agrees with the sentiment expressed by Miss Swift.

Email ThisBlogThis!Share to TwitterShare to FacebookShare to Pinterest
Labels: about me, ex-Christian life, hell

The Convenience and Self-flattery of Apostasy

I suspect that the very existence of apostates might be a bit of an inconvenience for Christians. Not all apostates obviously. Many fit the preferred narrative quite well. These are the folks raised in the church who "go astray" some time around adolescence. It's easy to pick on these folks because their departure often coincides with a time in their lives when they begin questioning the legitimacy of the authority figures around them and rebelling. This also happens to be a time when their hormones begin strongly leading them to engage in thoughts and behaviors that are deemed "immoral" by most Christians. They make easy targets for dismissal.

I'm sure many of these teens really do just want to cast off the shackles of moral standards and do as they please. But there are doubtless others that sincerely wrestle with and reject the faith they were raised in because they realize how intellectually untenable it is. Once their access to things like the Internet become unfettered and they begin having contact with divergent views, this process is likely accelerated. For many their rejection of Christianity is a combination of factors and not merely a simplistic desire to "fornicate with impunity."

Email ThisBlogThis!Share to TwitterShare to FacebookShare to Pinterest
Labels: about me, William Lane Craig

Complaining about the Exodus Movie

My series on the Pentateuch is plodding along rather slowly and I've still got about another twenty chapters to go before I even finish Genesis, but I'm going to take a break here and attempt a timely discussion of the first part of the book that follows it, Exodus.

You may have heard there's a film coming out this week that uses the early narrative portions of Exodus as its source material. Given the widespread promotion of the film across every platform known to man, you'd have to be living under a rock not to be aware of it. I've never been a fan of these biblical epics, with perhaps the exception of Ben Hur (1959), a film which only briefly intersects the biblical narrative. 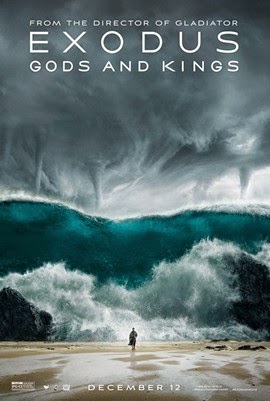 When I was a Christian I would usually lament the lack of fidelity to the source material. Now that I'm not one, I'm mainly not a fan of the genre because the films tend to be either hugely slanted toward religious audiences or stand in some kind of half-way point of being critical while still conforming to the expectations of those same religious audiences because money. I suspect Ridley Scott's film will sit solidly in the latter category, though I'm willing to be proven wrong. I'd like to be able to enjoy these films the way I enjoy films like Clash of the Titans (the Ray Harryhausen version, of course), but until such time as the culture I live in can view Yahweh, Moses and Samson the same way they currently view Zeus, Odysseus and Heracles, I don't think I'm going to be able to truly enjoy a film adaptation of a biblical narrative. That's just me. Your mileage my vary.

The Ridley Scott film has already been criticized for its portrayal of events involving specific ethnic groups without casting people in the principal roles that even remotely resemble folks from those ethnic groups. That will not be what many Christians will criticize, however. I'm going to go ahead and address some criticisms from some in the Christian community. The first is the standard complaint that the film is not faithful to "biblical history." The second is how many will be quite put off by the way the deity is portrayed in the film. Some of the early reviews I've read have mentioned that Yahweh is represented by an eleven-year-old boy and that the decisions and actions of the deity are similarly immature and, to borrow Christian Bale's term, "mercurial."
Read more »
Posted by The Apostate at 12/07/2014 4 comments: