Messages in the Sky 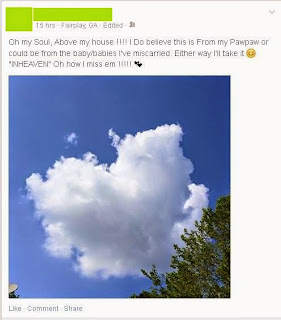 The initial inclination for me typically is to roll my eyes at the kind of stuff where Christians see messages in the sky specifically for them. Don't misunderstand. I'm not trying to ridicule anyone here, especially someone who is dealing with loss. But I often wonder if by embracing reality, I'm missing out on living in a perceived world in which people I loved who are now dead can communicate with me by making abstract patterns with tiny water droplets resting on condensation nuclei (read: cloud shapes).

Even when I was a Christian, this sort of folksy approach to religion completely eluded me. That's probably because I thought through this stuff when I was about six, not long after my grandfather died. Adults around me were talking about how my grandfather was looking down on me from heaven, but I had already concluded that wouldn't jibe with the religious paradigm from which I was working. Besides, six-year-old me much preferred the idea that grandpa was far, far away in some other dimension where he couldn't see me, particularly when I waited longer to seek out a bathroom than my disproportionately-undersized bladder could handle and accidentally pissed my pants. Fourteen-year-old me preferred the idea that my dead grandpa couldn't see me for different reasons.

Email ThisBlogThis!Share to TwitterShare to FacebookShare to Pinterest
Labels: about me, ex-Christian life, humor, thinking too much
Newer Posts Older Posts Home
Subscribe to: Posts (Atom)