In the first episode of Mad Men, the guys at Sterling Cooper ad agency are meeting with Lucky Strike and looking for a viable pitch for their ad campaign. The cigarette company is faced with the problem that they can no longer tout the safety of their product and they have no way to distinguish themselves from their competitors. Things are going south and Sterling Cooper is about to lose its biggest client until Don Draper steps in:

Don Draper: This is the greatest advertising opportunity since the invention of cereal. We have six identical companies making six identical products. We can say anything we want. How do you make your cigarettes?

Lee Garner, Sr.: Shame on you. We breed insect-repellent tobacco seeds, plant them in the North Carolina sunshine, grow it, cut it, cure it, toast it...

[Writes on chalkboard and underlines: "IT'S TOASTED."]

Lee Garner, Jr.: But everybody else's tobacco is toasted.

Don Draper: No. Everybody else's tobacco is poisonous. Lucky Strikes'... is toasted.

Roger: Well, gentlemen, I don't think I have to tell you what you just witnessed here.

Don Draper: Advertising is based on one thing: happiness. And do you know what happiness is? Happiness is the smell of a new car. It's freedom from fear. It's a billboard on the side of a road that screams with reassurance that whatever you're doing is OK. You are OK.

What Draper has done here is employ a marketing technique called "Meaningless Differentiation." People marketing consumer products do this all the time. P&G famously touted Folger's instant coffee and its "flaked coffee crystals" in its advertising, implying that this somehow improved the flavor of their coffee. In reality, it's complete bullshit because while the surface area in ground coffee does meaningfully differentiate that kind of coffee, it does jack squat for instant.

Religions do this too, and certain brands of Christianity have made a habit out of tricking their customer base into thinking such slogans are meaningful and even profound. Examples would be things like "Religion is man's attempt to reach God, but Christianity is God reaching out to man." Similar to this is my personal favorite: "It's not a religion. It's a relationship." Excuse me for a moment, but I now have the uncontrollable urge to roll my eyes.

Christianity is masterful at this. This is a religion that has been able to tell people with a straight face that it's monotheistic, despite the fact that it has an enormous pantheon. Granted, worship is directed exclusively at three distinct persons that are somehow also of one substance at the head of that pantheon, but this is still a religion that posits the existence of literally tens of thousands of demigods in either the service of or rebellion against those persons with at least a couple of those demigods being quite powerful. Christians will mock Hinduism for its plethora of gods and goddesses of all shapes and sizes, but by a similar reckoning Hinduism has a god-concept that is unified, transcendent, and personal, making it just as monotheistic as Christianity and arguably more relational.

Don't misunderstand. I'm certainly not saying all religions are identical or that they lack meaningful distinction. I'm just saying a lot of what is touted as distinctive is often only superficially meaningful. Additionally, any religion can play this game.

"Our religion wasn't named after its founder (Christianity, Buddhism, Confucianism), ethnic group (Judaism), or geographic region (Hinduism). It was revealed by God himself."

"For all of mankind; not just chosen people."

"The whole of our sacred text was written down within twenty years of our prophet's death."

"Why wait for an afterlife when you can have enlightenment now?"

"It's not relational; it's realizational."

"A truly personal relationship with God, free of a priestly class, mandatory rituals, or fasting."

"The Hindu and Abrahamic god-concepts all rolled into one."

"A marketing slogan? Look, take it or leave it. We're not nudniks. You know where to find us."

"The only religion that teaches you how to go with the flow."

"It's not a religion. No, seriously. It really isn't. That's not a slogan. Why are you writing this down?"


A Couple of My Favorites
I want to turn now and look at the two slogans I mentioned earlier. The first is one that at least seems to posit a meaningful distinction:


"Religion is man's attempt to reach God, but Christianity is God reaching out to man."

I used to think this one had some merit. The distinction implied here is in the area of soteriology. That's the branch of theology dealing with salvation. Now, I could probably devote an entire post to unpacking this and maybe I will later, but basically this distinction is a shell game. You're told you are in a paradigm that requires no works and is all about grace. Your standing with the divine is in no way predicated on what you do for the divine, but rather what the divine has done for you.

It sounds appealing, but what you actually find yourself in is a classic double bind. See, as it turns out, the evidence that God has actually done this work in your life and brought you in good standing with him is what you actively believe and practice. You still have to "believe on the Lord Jesus Christ" and "work out your salvation with fear and trembling." Sure, they will tell you that God has enabled you to do those things through his grace, but in practice it looks exactly the same as the kind of hoop-jumping common to many other religions.

If you don't believe the things you're supposed to believe and practice the things you're supposed to practice regularly and consistently, or you cease to believe and practice those things entirely, this is evidence that you either are no longer or never were reconciled to the divine and in good standing. In this way you still have all this inner belief and outer practice to accomplish, you just don't get to take credit for it. God gets the credit. For you to take credit for it would be legalism and trusting your own efforts for salvation...which would be evidence that you're not saved. Holy shit. A person could go crazy like that.

This isn't a feature. It's a bug. For those that take it seriously, it's an emotionally distressing dilemma resulting from what are essentially conflicting messages:


"Nothing you can do of your own effort can make you right with God and save you from eternal torture."

"If you think there is anything you can do on your own to make you right with God, then you will be subject to eternal torture."

"If you don't believe X and practice Y, then this lack of belief and practice may be evidence that God has not saved you from eternal torture."

Which brings me to the most irritatingly overused slogan in popular evangelicalism:


"It's not a religion. It's a relationship."

My buddy Neil over at Godless in Dixie has some thoughts on this slogan. Needless to say, it's fraught with problems. The first is the statement that it's not a religion. Uh, yeah. It is. Look at any definition of religion. Seriously, any of them. Christianity fits. Only in the idiosyncratic world of evangelical church-speak does "religion" have any definition that Christianity won't fit. This is the same Bizarro World where even though Christianity doesn't fit the definition of "religion" somehow "atheism" does. The notion is absurd and you're not fooling anyone but yourselves. Unless you're Lewis Carroll's Humpty Dumpty, words mean things. 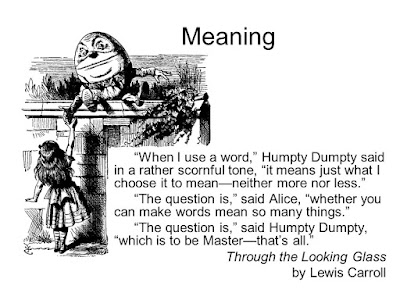 Furthermore, you can't special plead this one because your own religious text refers to religion (See James 1:26-27), and not in a negative way. Christianity also isn't the only religion that claims to place adherents in a personal relationship with a deity. In fact, most of them do.

Aside from that, calling it a personal relationship seems a bit outside the connotations typically associated with relationships. I have a relationship with my wife, for example. I can use my normal senses to detect her presence. I don't have to rely on some inner feeling that isn't describable in order to know she's there. When I talk to her, she talks back. Right then. Right there. And in an audible way that can be confirmed by others around me and recorded on various instruments.

My wife doesn't speak to me through the voices of ancient contradictory texts that can be variously interpreted by modern theologians. If I don't understand something she says I can ask her to clarify and she usually will. I don't have to beg and plead for her to speak to me and then look for outward signs or inward feelings so I can conclude she's done so. In short, my relationship with her is clearly discernible from one I might have with, say, an imaginary being. As one of my friends once put it:


"When you're in a relationship with someone who isn't real, that's called a delusion. So what you really should be saying is, 'It's not a religion, it's a delusion.' And maybe be a little less proud of that."

Look. I get it. You have to distinguish yourself from your competitors in this market. Perhaps more than that, you want freedom from the fear that you might be wrong and confirmation that everything you're doing right now is OK. Cigarettes have ill effects and so do many brands of religion. A lot of people have given up on both. As Don Draper might say, "It's everyone else's religion that's poisonous. Christianity...is toasted!"
Posted by The Apostate at 3/24/2016