We move now to some begats. People often like to skip over these when they read the Bible, but often these can present some real oddities and problems. This series of begetting is no exception.


Genesis 5:1-32
There are a few odd things about this passage that recounts the descendants of Adam through Seth. First, the passage strangely seems to treat the previous four chapters of Genesis as non-existent, almost like it was a reboot or was from a different source. Seth comes across as a firstborn son and Cain is completely forgotten about.

Additionally, the line of Seth strangely parallels the line of Cain, even sharing similar names: Kenan and Cain, Mahealel and Mehujael, Jared and Irad, Enoch and...well...Enoch, Methuselah and Methushael, Lamech and...well...Lamech, Naahah and Noah. It’s a rather odd coincidence to say the least. It’s almost like there was one tradition that had humankind coming from Cain, but another tradition came along and inserted Seth, and changed Cain to Kenan because some author was understandably disinclined to have all of humanity descending from a murderer.

Another odd item of note is that the genealogies can be compared to a tablet with a list of Sumerian Kings (c. 2000 BC) with absurdly long reigns that pre-dated the Sumerian flood event. The list begins with king Alulim (Adam?) whose kingship “descended from heaven” reigning in Eridu, the first city created by Marduk called the holy city and the dwelling of the gods’ delight (Eden?).

Also, in the Sumerian Kings list, the seventh king from Alulim, En-men-dur-ana, received direct instruction from the gods and was taken up to heaven by them. His descendants became priests of the sun god. According to verse 24 of this chapter of Genesis, the seventh from Adam, Enoch, was also taken up to heaven and coincidentally his time on earth of 365 years (v. 23) just happens to be the number of days in a solar year.

Even though the phrasing of verse 24 isn’t abundantly clear, it does appear to imply that Enoch, like Elijah later, was taken up to heaven without having to “see death” as the writer of Hebrews 11:5 understands it to have happened. Of course, the writer of Hebrews seems to forget this when just a few verses down in verse 13 when referring back to Abel, Enoch, Noah, et al, he says, “these all died in faith.”

Regardless, the whole thing is odd when compared to the New Testament as both Romans 5:12 (“death spread to all men because all sinned”) and Hebrews 9:27 (“it is appointed for man to die once”) seem to contradict the notion. Theologians have devised several ways around this conundrum ranging from Enoch and Elijah simply being exceptions to the rule to both of them coming back to earth later to experience death during the Great Tribulation (I'm not going to spend time showing why that solution is ridiculous).

Similarly, according to John 3:13, “No one has ascended into heaven except he who descended from heaven, the Son of Man.” I suppose one could get around this by saying Enoch didn’t actually ascend into heaven per se; he was really just directly transferred from earth to the dimension of heaven sort of like a teleportation that didn’t involve actually moving through the sky.

The problem with this is that few people nowadays when pressed think that Jesus actually ascended into heaven, as in levitating off the ground and moving upward into the sky until he got far enough into the sky to reach heaven. We’ve sent lots of people and unmanned craft up there. We now know that going up into the sky only gets one into the enormous vastness of outer space, not heaven. It follows then that at some point during his ascent, Jesus would’ve had to have undergone some kind of teleportation or translation to some unseen dimension just like Enoch.

Indeed the whole concept of “ascended into heaven” is disingenuous and deceptive. Sure it made perfect sense 2,000 years ago when common people thought that going up into the sky would get you to an actual physical place where the gods dwelt. Nowadays people have to assume it was all just a ruse by which Jesus, Enoch and Elijah played into pre-scientific expectations and that they could’ve just as easily vanished into heaven rather than going through the motions of moving up into the sky until they got safely behind a cloud or something and could really make their way to heaven by teleportation/translation or whatever. 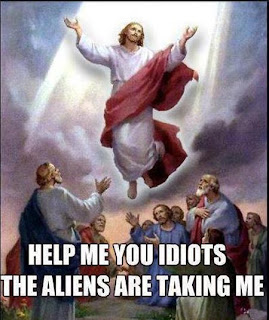 To this day Christians confess, "he ascended into heaven" every time they recite the Apostles' Creed, and yet when they do, they do so with equivocation. If they really thought about it they would admit that this is not what they are truly confessing anymore. It may be what Christians meant by that saying 1600 years ago, but that can't really be what it means to people today. That is, unless they truly believe that heaven really is a place somewhere in outer space.

Something else that’s odd that often escapes people’s notice is that according to this record, Adam, Seth, Enosh, Kenan, Mahalalel, Jared, Enoch and Methuselah were all supposedly alive when Lamech, Noah’s father, was born. That means Adam died when Lamech was in his 50’s. Too bad Lamech waited 182 years to start a family or Adam might have lived to see Noah born. Of course, it seems Noah waited until he was 500 years old to get busy, or at least to successfully procreate.

Noah has three sons: Shem, Ham and Japheth. We’ll get to re-read this fact several times over the next few chapters because apparently Moses really wanted us to know this or was just forgetful. Of course, it could be that this happens because there were multiple sources being woven together by a redactor. Nah, that can't be it.

Anyway, recall from our previous installment that Adam and Eve spoke Hebrew based on all the puns they used and obviously Noah and his sons did as well, or else how would the language have survived the Flood? Like Eve’s name choices, the names Noah and his wife choose for their sons are remarkably prescient. Shem means “name” and, of course, it is his descendants who will carry the name of God with them. Ham means “hot” and lo and behold his descendants will live in areas that are hot. Japheth means “expansion” and naturally his descendants will live on the northern edges of what would have been the known world to an ancient Hebrew author. That’s truly remarkable! Well, not really if one understands the whole narrative is just the basis for more mythic etiology.

Genesis 6:1-4
A common feature of ancient mythology comes up here when the bene elohim or “sons of gods” have sex with mortal women and the resultant unions produce super human giants. Arguments have been made that bene elohim refers to the descendants of Seth.  However, the context, the usage of the term in places like Job (1:6, 2:1 & 38:7) and extra-biblical sources militate heavily against that interpretation. It strikes one as merely an attempt to avoid dealing with the numerous oddities presented by divine beings having sex with mortals and their offspring becoming comic book super beings. That interpretation sounds too much like Heracles and Perseus, so it can’t possibly be correct, right?

Next up we'll start looking at Noah and the Flood narrative.

Goin' up to the Spirit in the sky: Enoch, Elijah, Jesus...and Norman Greenbaum