We now move on to the final chapter dealing with Noah's Flood. Here we begin to see, among other things, how the timeline of the Flood makes for some odd circumstances.

Genesis 8:1-3
Here we have another term, “remembered,” (zakar) that has to be given an expanded meaning because it can’t possibly mean what it looks like it means. Otherwise it might imply that Yahweh does not possess timeless omniscience, but rather has to rely on his memory of past events. It's just another anthropomorphism for the stupid people that can't grasp that concept without using human-like descriptions.

It is noteworthy that the writer of this passage seems to think that by having a wind blow across the land and closing the floodgates in the sky, the waters will just recede. In his view of cosmology that might have worked just like it did before. In reality, no amount of wind is going to just make nearly two times the currently extant volume of water on the earth just disappear.


Genesis 8:4-5
Based on the chronology so far, using a lunar calendar, we now have 150 days of total flooding plus 74 days (the first day of the 10th month less the 17th day of the 7th month = 74 days) of water receding to where the mountains become visible after the ark has come to rest on a mountain. So the ark rested on the mountains and then two and a half months later the tops of those mountains finally became visible? That wind from God sure is taking a long time to do its work.

Genesis 8:6-7
So now we’re back to forty days again? OK, we’ll just assume for argument’s sake this is to be tacked on to the 150 (including the first 40) plus 74 days already given the narrative. We’re now up to 264 days. The ark has been settled on a mountain for 114 of those days. Stay with me now.

Here we learn that Noah opens the window. Not a window, the window. As in the single 18 inch high window on the top deck that is the only known source of ventilation. It has apparently been closed. He opens it to send out a raven. It flies back and forth until the waters dry up.

Genesis 8:8-9
But wait. Now we have a dove sent out instead of a raven. This is similar to Atrahasis who, after seven days, sends out a dove then a swallow who both come back. Finally, Atrahasis sends out a raven who does not return.

Verse 8 tells us that Noah sent out the dove for the expressed purposes of seeing if the waters had receded. Why would this be necessary? Up to this point Noah has been getting messages directly from God himself. Why does he need to send out birds to discover anything? We find out later that Noah doesn’t even act on the information he receives from this little experiment, making the whole exercise pointless. It makes sense for Atrahasis to do this. He wasn't getting much communication or help from the gods. For Noah it's a completely unnecessary gesture.

It can’t mean what it looks like it says, right? “All the surface of the land” must not be taken in the universal sense here. The dove merely has no place to land within its range. It can see those mountain peaks, but it can’t reach them. Or maybe this is another one of those chiasms. Whatever the explanation is, Moses meant to write it this way. There’s some deep theological reason for all the confusing details about clean animals going in by twos (6:19-20, 7:8-9) and also by sevens (7:2) and the flood lasting both forty (7:17) and 150 (7:24, 8:3) days and Noah sending out a raven who flies around until finding dry land and (8:7) then this expanded dove account which follows. It’s not at all because we’re dealing with a cobbled together story from at least two different sources.

Genesis 8:10-12
Noah waits seven more days and sends out the dove again. This time it comes back with a freshly plucked olive leaf. That’s strange. We’re now up to 271 days or 278 according to AiG’s arbitrary insertion of 7 days between the raven and dove. The ark has been stationary and no longer drifting for four months. Just seven days prior to this, however, dry land was out of this dove’s range, meaning everything in this dove’s range would’ve been under water. Seven days later, not only is dry land in range, but an olive shoot with a leaf is available for plucking. How long does it take this miraculous olive seed that didn't rot completely while sitting in filthy, brackish water for months to settle in the sediment, germinate and grow enough for shoots with leaves to appear? In Noah’s world, it’s apparently less than seven days. Turns out in our world, it's a bit longer.

After 314 total days of being on the ark and over a month since the dove hasn’t come back, Noah somehow takes the gigantic roof off and sees that the surface of the ground is dry. At least the animals below the first deck can breathe now. 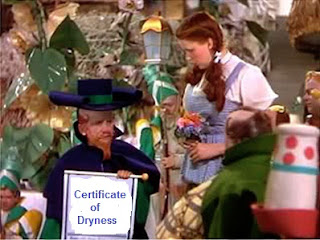 Does he let them all off? Nope. Verse 14 indicates that verse 13 did not mean that at day 314 the land was morally, ethic’lly spiritually, physically, positively, absolutely, undeniably and reliably dry. It’s actually not until two months later that the ground is not only merely dry, but really most sincerely dry.

Finally, after 370 days of being on the ark (or 377 days if we interpret 7:1-4 to mean they were on the ark for a week prior to the flood as AiG does), three months after the dove did not return and over seven since the ark came to rest, Elohim speaks to Noah and commands him and everything else to come out of the ark. I imagine the animals came out rather slowly, what with over a year of muscular atrophy and all. I wonder what they ate. Vegetation has appeared according to the whole dove incident, but the carnivores certainly wouldn’t be able to eat anything for a while or they'd cause mass extinctions and then die off themselves.

Genesis 8:20-22
Noah builds an altar to Yahweh and offers every kind of clean animal and bird on it. Yahweh smells the soothing aroma of burning animal carcasses and says in his heart that he will never again curse the ground or destroy everything that lives. Yahweh then sings a little song about it in verse 22.

Again the supposedly transcendent and holy God is having trouble finding distinction from other humanlike and capricious ancient tribal deities. Nearly all of them seemed to really enjoy soothing aromas from burning sacrifices or incense. In the Epic of Gilgamesh, after Atrahasis gets off his boat, he makes sacrifices, burns incense and the text says, “The gods smelled the sweet savor.” Belet-Ili, the goddess of the womb who created mankind for the gods arrives and holds up a necklace made of colorful beads that was given to her by Anu the sky god and says she will never forget as long as she’s wearing the colorful necklace around her neck. Sound familiar?

The whole notion of the God of the universe smelling burning animal flesh rising up to his nostrils in heaven and deciding not be pissed off, even though mankind’s thoughts are still just as evil as before seems kind of silly. He’s killed thousands of people and animals because of their evil thoughts and now we’re left with the impression that a bit of burning cow flesh would’ve kept his wrath in check all along? On top of that he makes a promise in verse 21 that he doesn’t really intend to keep unless one decides to parse the phrase “as I have done” to mean “in the same manner”, i.e. using a flood. According to 2 Peter he’s going to torch everything.

So rise and shine and give God the glory...or he'll wipe out everything on the face of the earth. It's like a cute little ditty about the Holocaust.