In this installment: the armies of the greatest empire history has ever never known are no match for an old man and his slaves, the ultra-hipster Amalekites get conquered before they exist, there's some vital clarification regarding Abram's ethnicity, we find more evidence that Moses had a TARDIS, and the Hebrew patriarch pays off a Canaanite high priest and Yahweh is totally cool with it.

Genesis 14:1-12
There are nine kings mentioned in this passage. This is the best and only time in the Abraham narratives where we even get an opportunity to try to line up the account with the historical and archeological records of the Ancient Near East. It should be relatively easy since nine kings and a pivotal battle are mentioned in this passage. Indeed for about 200 years archaeologists tried to find matches for these kings. Most have given up. Why? Because the geopolitical situation described in this passage has no correspondence to the records of anything that took place in the first half of the 2nd millennium BCE when Abraham was supposed to have lived.

The suzerain king who's heading up this alliance is mentioned as being Kedorlaomer king of Elam. However, the Elamite Empire didn't have the kind of power that could possibly reach the Jordan Plain until hundreds of years after Abraham, in the 12th century BCE. During Abraham's time the Elamites were largely contained by their rival Mesopotamian neighbors. Indeed the Elamites were constantly at war with "Shinar" at this time and it wasn't until the Assyrian threats to the region in the 10th century BCE that Elamites began forming alliances with their Babylonian neighbors.

The other three kings in this alliance hail from Shinar (Babylon), Ellasar (anybody's guess), and Goyim (the Hebrew word for Gentiles, so also anybody's guess). If one assumes that Ellasar is supposed to represent Assyria and Goyim is supposed to be generic Gentiles, then what we have here is an alliance of kings that are representative of every major power that oppressed Israel and Judah in the 6th, 7th and 8th centuries BCE. If I didn't know any better, I'd say this is all just to set up some kind of historiographical porn in which the Hebrew patriarch kicks the asses of representatives of nearly all of Israel's foreign oppressors, rescues the captives and drives those foreign powers out of the land like a boss. One can't help but think of a period of Jewish history in which such a fantasy would've been quite appealing.

Among those conquered by this alliance of foreign kings in this passage is “all the country of the Amalekites.” That’s quite a feat considering Amalek, the father of the Amalekites, was Abraham’s yet unborn great grandson (Gen. 36:12). Did Kedorlaomer and his allies travel into the future to battle the not-yet-existent Amalekites? Of course, according to bible-logic, one might even say Amalek himself, who was defeated by these four powerful kings, actually defeated them through Abraham, for he was still in the loins of his ancestor when they fought him.

There are a couple of ways people try to wiggle out of this anachronism. One is by suggesting that this is merely a reference to a geographic area that would later be inhabited by the descendants of Amalek and not the Amalekites per se. The other is by supposing that the word “Amalekite” is not a proper name and is simply referring to any people who live in a valley. The former solution appears to defy the context of the passage, especially given the way it’s employed along with the reference to the Amorites. The later solution does not comport with every other time the term “Amalekites” is used everywhere else in the Bible.

Genesis 14:13
Why does the author use the term “Abram the Hebrew” in this manner? It makes sense later when Joseph is referred to as a Hebrew in a quotation from an Egyptian (Gen. 39:14) pointing out his outsider status, but its usage in a narrative voice here seems really odd. Wouldn’t Moses’ audience of Hebrews have understood very well already that Abram, their forefather and one of the main subjects of this book, was a Hebrew?

It’s like reading a passage about the Revolutionary War in an American history textbook when out of nowhere the author writes something like, “and a soldier fleeing the capture of Fort Ticonderoga came and told George Washington the American...” Only an author writing from a foreign perspective would feel the need to include a descriptor like this in a narrative voice. It’s as though the source material is from an outsider, which may be one of the many reasons why scholars think this passage may be a piece of anti-Babylonian propaganda dating from the 6th century captivity.

Genesis 14:14
Curiously, we are told that Abram and his men pursued Lot’s captors as far as the city of Dan. It’s odd because not only is Dan supposed to be Abraham’s great grandson, but the Danites did not inhabit this area and rename it until long after Moses, Joshua and all the Judges of Israel were dead. That’s nearly a thousand years after the events described in this passage. And it’s not like the city didn’t have a name before that either, as Judges 18 records that the name of the city was Laish before the Danites renamed it. I've lost count of the anachronisms at this point. Clearly Moses is a Time Lord. 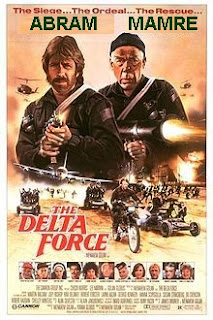 In one night, Abram, who just happens to have 318 highly-trained special forces commandos in his service, manages to defeat the four kings of a vast empire who had apparently been the scourge of the entire Near East, conquering everything in their path up to this point, yet curiously unknown to any other ancient historical records. Abram and his posse chase these great kings and their battle-hardened veteran armies who are now fleeing like frightened school girls back beyond Damascus and recover all the property and captives from the five cities of the plain. That’s quite the feat for 318 slaves, a nomadic octogenarian herdsman and however many people the three Amorite leaders had with them.

Genesis 14:18-20
Abram is greeted by Melchizedek king of Salem with bread and wine. We are informed that Melchizedek was a priest of El Elyon (El Most High) and that he blessed Abram and in turn Abram gave him a tenth of everything.

These three verses are odd for a couple of reasons. First, is the reference to El Elyon, who could be understood to be a separate deity altogether in these verses and would have to be assumed as such if not for verse 22 linking the names together. "Yahweh" could have easily been inserted in verse 22 by an uncomfortable scribe and if apologists get to use the "scribal insertion" excuse to get out of inconveniences in the text, so do I. There will be more to say on the Canaanite deity El later.

The other noticeably unusual feature of these verses is that they completely interrupt the flow of the narrative. This is what the passage looks like with the Melchizedek verses removed:

“After Abram returned from defeating Kedorlaomer and the kings who were with him, the king of Sodom went out to meet Abram in the Valley of Shaveh (known as the King’s Valley). Then the king of Sodom said to Abram, ‘Give me the people and take the possessions for yourself.’ But Abram replied to the king of Sodom…”

The king of Sodom is reintroduced into the text in verse 17 after Abram returns and in verse 21 he addresses Abram. Verses 18-20 artificially break that narrative flow and interrupt the account of the meeting of Abram with the king of Sodom. It’s as though someone inserted those three verses into the text as an afterthought.

The passage simply makes more sense without verses 18-20 complicating the details and sequence of the narrative and is best understood as the editorial insertion of some other source material placed here by someone trying to set historical precedence for centralized worship in "Salem" [coughJerusalemcough]. Otherwise it becomes difficult to make sense of what Abram tells Bera; and our presumed author Moses comes across, once again, as a inept story-teller.

Genesis 14:21-24
It's hard not to see Abram as a self-righteous jerk in this passage when he tells Bera: "I swear to God I won't even take so much as a single manure-stained shoelace from you wretches, so you can never say 'I made Abram rich'"; mainly because he had no problem getting rich off of tricking pharaoh and pimping out his wife/sister and will repeat that trick later in Gerar, a place about which he says, "There is no fear of God." He's got no problem taking stuff from Egypt and Philistia. Maybe he just has moral reservations about taking stuff from places like Sodom where they've caught the gay.