In this installment we find a mistaken martyr, some superfluous Canaanite clarification, a confusing setting for worship, Episode I of the Patriarchal Pimping Trilogy, Sarai putting the "sexy" in "sexagenarian", a bit of justice Yahweh-style, and some time-travelling Egyptian camels.

Genesis 12:1-4
11:26 says Terah had Abram at 70. 11:32 says Terah lived to be 205, making Abram 135 at the time of Terah's death. This verse, however, says Abram was 75 years old when he left Haran, presumably after his father's death. This might not be that big of a problem as the text doesn’t explicitly state that Abram received the call from Yahweh and left Haran until after Terah died. It's possible to read this as though Terah could have still been living when Abram got the call and left, given the way it’s worded. We certainly get the impression that Abram didn't leave Haran until after his dad was dead, though. The bigger problem is that the supposedly inspired writer of Luke claims that Stephen understood this to be exactly the case.

In Acts 7:2-4 Stephen reportedly says, “The God of glory appeared to our father Abraham when he was in Mesopotamia, before he lived in Haran and said to him, ‘Go out from your land and from your kindred and go into the land that I will show you.’ Then he went out from the land of the Chaldeans and lived in Haran. And after his father died, God removed him from there into this land in which you are now living” [emphasis mine].

It appears that Stephen or Luke or whoever wrote the book of Acts did not read the text very carefully like a good apologist. It’s OK, neither did Paul when he said the Law of Moses came 430 years after the promise to Abraham, apparently forgetting that Israel was in Egypt for 430 years, meaning Paul left unaccounted the 200+ years between Abraham receiving the promise and Jacob taking the family down to Egypt. I forget details all the time. It happens to the best of us.

In truth, though, I don't think the writer of Acts is being careless at all. I think it's more likely that he was just trying to make a theological point (i.e. that God transcends location, illustrated by the fact that Abraham received the call while in far off Mesopotamia). The writer of Acts is reworking the details of the Abram narrative to suit this theological point, the details of the Genesis account be damned. He does the same thing with the details of the Joseph narrative and the Exodus narrative as well to make this recurring point. Note that it's after Stephen is stoned that the church spreads outward beyond Judea (at least, according to the "history" given to us by the writer of Acts). Also note that Stephen's speech is the longest single speech recorded in the entire book of Acts, far longer than any of Paul's, and serves as a historical prologue for the spread of the church beyond Jerusalem, Judea, Samaria, and to "the end of the earth" (Acts 1:8).

Some have tried to find a way around one of Stephen’s mistakes by supposing that Abram was actually born when Terah was 130 and that 11:26 does not mean that Terah had Abram at 70, just that he started having kids at 70 and that Abram was one of those kids who really came along 65 years later. He’s just listed first because of importance, not birth order. It could have been that Haran was born first.

A popular solution from conservative Bible commentators like Albert Barnes, RA Torrey, EF Harrison, Richard Longenecker, et al is to admit that Stephen is relaying inaccurate information and that the inerrant and inspired Luke simply recorded the errors "to be faithful to what Stephen actually said in his portrayal" (Longenecker, The Acts of The Apostles p.341). This doesn’t work as Acts states Stephen was filled with the Holy Spirit (Acts 7:55). Is this the same Holy Spirit that filled the writers of Holy Writ to ensure their inerrancy? How far do we want to take this? Does this now mean that any recorded speech in the Bible could have errors? Does this mean that non-apostolic authors like...oh...say...Luke could contain errors in their writings? I think using this line of thinking to escape this problem only creates more problems.

The other solution that Abram was not the one born when Terah was 70 could be a convenient albeit ad hoc explanation, but it ignores the other problem of when Abram received the call from Yahweh and who actually moved the family from Mesopotamia to wherever Haran was supposed to be (nobody seems to know). On that point the writers of Genesis and Acts do not and cannot be made to agree in any simple and rational way. It’s so much easier to just recognize that the author of the passage in Acts either misread, misunderstood (can you blame him?) or most likely wasn't that concerned with what the Septuagint reading was and messed up the chronology either intentionally or inadvertently. Time and again, the books of the Bible prove to contain exactly what we would expect in works written by ordinary human beings, and yet it's impossible for some people to recognize...especially when it's not admitted as a possibility because of certain prior assumptions about the Bible never being wrong.

Also, why is Yahweh appearing (can Abram actually see him?) to Abram under a ceremonial shrine tree at a high place? Isn’t this in line with later practices that are railed against by prophets like Jeremiah and Ezekiel? Yahweh even takes the opportunity to make promises to Abram there and Abram builds an altar. Won’t this be confusing for subsequent generations who wish to emulate this practice when it’s later condemned (Deut. 12:2)?

Genesis 12:8
There Abram goes again, building an altar at Bethel (literally "the house of El") and setting precedence for later practices that will be condemned (1 Kings 12:29-33).

Genesis 12:10
Staying in Egypt for a while during a famine sets up another recurring motif in the biblical narrative. One can’t help but wonder how the “going to Egypt to escape trouble” trope originally got started. The writer of Matthew even made sure to have Jesus do it. Too bad none of the other New Testament writers (Luke especially) appear to have been aware of it.

Genesis 12:11-16
This is the first and shortest of the three wife-sister narratives, or the “Dude, she’s just my sister” plan employed by the patriarchs while sojourning in another land during a famine. Abraham will use it again in chapter 20 with Abimelech while in Gerar, and oddly enough, Isaac will use the same technique in chapter 26 also with Abimelech in Gerar. Did they really do this on three separate occasions or is it more likely that there were three different versions of the same story attributed to two different patriarchs and all three versions were eventually worked into the text of Genesis? Does it make more sense to think that Abraham, Isaac and Abimelech were complete imbeciles with no notion of déjà vu whatsoever just so we can rescue the text from being seen as ahistorical folklore?

We see this kind of thing with Greek mythology and with modern-day superheroes all the time. It seems hard-core comic book geeks and biblical inerrantists are the only ones running around trying to make excuses for every continuity issue and attempting to retcon every problem they run across. Everyone else seems to be able to accept these things for what they are.

Why did Klingons look so different prior to the events depicted in Star Trek: The Motion Picture? Because shut-up and enjoy the show. That's why.

Abram is concerned that Sarai is so beautiful that the Egyptians will kill him and take her as a wife. But this was not just a case of beauty being in the eye of the beholder, as the Egyptians really do see her as very beautiful. Pharaoh hears about it and is so enamored with her beauty that he takes her into his own harem, apparently supposing her to be a young virgin. On account of this, Pharaoh treats Abram well and gives him stuff. Are we really supposed to believe that Pharaoh never bothered to have sex with this beautiful woman who is now in his harem? Wouldn’t he have had his way with her as soon as possible? Abram seems totally fine with going along with this ruse and essentially whoring out his sister/ wife.

What’s even odder is that we learn later in 17:17 that Sarai is only ten years younger than her   brother/husband turned pimp, Abram. Abram left Haran at age 75 (12:4), journeyed into Canaan, travelled to Shechem, then moved to the hill country east of Bethel and continually journeyed in nomadic stages down to the Negev (the south country) and finally entered Egypt during a severe famine. How long did that take? A year? Two years? Ten years? Either way, Sarai is well over 65 years old when they go to Egypt. At 65 she’s so beautiful and youthful looking that Pharaoh takes her into his harem.

Why doesn’t the narrative draw attention to this amazing fact? Wouldn’t ageless beauty be something worth pointing out? Instead it’s only when we look ahead five chapters and can calculate this astounding bit of information that it dawns on anyone just how unusual this is. It’s almost as though the writer of this passage was not even aware of it. When this incident is repeated in chapter 20, it will be even more amazing as Sarah will be over 90 years old.

Another oddity is that the pharaoh is never identified. Indeed Moses seems curiously unfamiliar with the particulars of Egyptian history despite supposedly being raised in a pharaoh's court. Indeed no Bible writer ever identifies which pharaoh is involved in any story until we get to Shishak at the time of the divided monarchy following Solomon's reign. Even then it's hard to line up the details of the Biblical account of Shishak with the Egyptian records of Sheshonk I. 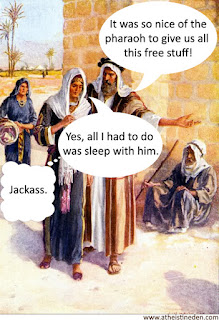 As one would expect, Yahweh is not at all cool with Abram pimping out his wife and selling her into clandestine polyandry, so naturally he punishes the faithless and deceptive refugee who tricked everyone and took advantage of their hospitality the ignorant host and his completely innocent household with great plagues leaving them to figure out what went wrong. Abram leaves Egypt with a bunch of slaves and livestock including, oddly enough, camels; a beast of burden that wouldn’t be regularly used by the Egyptians until the Assyrians and Persians introduced them around the 6th and 7th centuries BC (which may explain why there isn't even an Egyptian word for "camel").

In most works of fictional literature, this story that has Abram going into Egypt to escape famine and plundering his host after a series of plagues would be considered foreshadowing of later events by the author. With the Bible, however, many seem to assume that God actually ordains historical events so they play out just like a storybook, or as I was once told, "all of history is just His story." Get it? That's just the kind of cheesy cliché you'd expect to see on a church sign.