Christ figures have been around since…well…before Christ. Even as a Christian I acknowledged that there were what theologians often referred to as “types” of Christ in the Old Testament. These included Adam as a son of God, Abraham as an intercessor, Noah as a deliverer, Enoch who walked with God and ascended into heaven, Melchizedek a king and priest, King David the shepherd king, Isaac the willing sacrificial victim, Moses the lawgiver and deliverer with an infant exposure story, Joshua (same name as Jesus) the conqueror who led people into the Promised Land, Joseph the humble servant who became a ruler and deliverer, Jonah the prophet who was in “death” for three days and was “resurrected”, Judah who offers himself in exchange for the life of his brother, Boaz the kinsman-redeemer for Ruth, Daniel who is thrown in a pit of lions and emerges unscathed, Solomon the wise ruler and supposed husband of the female protagonist of the Song of Solomon, Elisha the prophet who miraculously multiplied resources and performed resurrections, Samson the Nazarite deliverer with a miraculous birth who is betrayed and sacrifices himself, and on and on.

I always found these recurring “types” to be compelling evidence that the whole of the history of the Old Testament was pointing to Jesus Christ. It was astounding to me how all these people (and even some inanimate symbols) seemed to have so much in common with Jesus. Of course, it never occurred to me that not only do many of these tropes show up in myriads of other forms of mythology and folklore, but also there's a very simple explanation for these remarkable similarities and it's that people crafted the stories about Jesus either consciously or otherwise and hybridized their telling of the events and details of his life in conformity to these recurring mythic and folkloric motifs. After all, there’s nothing new under the sun, right?

This happens time and again in art and literature. Arguably the Gospels themselves bear the marks of being the product of a remix culture that encouraged the combining, reworking and editing of existing stories. Even with modern copyright laws and technology that can detect copies, remixes still dominate the landscape. In a sense, everything’s a remix. Despite the suggestion from Christian typology that all these motifs found their “antitype” fulfillment in Jesus Christ, these tropes continue to be applied and reworked into arguably better stories than the supposed “Greatest Story Ever Told”.

What I’d like to do in this series is examine some modern mythological characters that take on Christ-like qualities and rework them into what I consider to be better messiahs than Jesus. The point of this is not to be polemical or to formally argue against Christianity per se. The purpose is simply to have a little fun with the idea that there was something wrong with the fact that I found the story of Jesus to be a bit, well, lacking when compared to other Christ-figures. I always felt guilty for feeling this way when I was a Christian. The Gospel was supposed to be the ultimate story and Jesus was supposed to be the ultimate hero. How could I possibly find the story itself boring and wanting? Something must have been wrong with me. I blamed my sin nature, of course.

Now that I’m on the outside, looking back I can see that there are modern mythic messiahs that are far more interesting, compelling, entertaining and multi-faceted than Jesus could ever hope to be. The argument from detractors will certainly be, “but Jesus was real!” Perhaps that would be the case if it were true, but that’s an assertion that I find highly implausible [don’t misunderstand; I’m saying Jesus as portrayed the Gospels never existed, not that some foundational Jesus never existed].

The first modern mythic messiah I want to examine is Martin Seamus McFly, the protagonist of the film Back to the Future. Some of you are thinking, “Really? Marty McFly is a Christ-figure? That's about as dumb as a screen door on a battleship!” Well, to quote Ray Arnold from Jurassic Park: “Hold on to your butts” because I’m about to blow your mind… 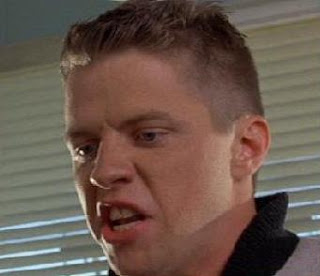 Before we look at how Marty makes a better messiah than Jesus, let's try to establish the premise that he is, in fact, a Christ figure. A Christ figure needs someone to redeem and we certainly find those candidates in Marty's pathetic parents, George and Lorraine. Our Adamic George even has a quite literal fall (hint) out of a tree (hint) while ogling Lorraine and then is hit by his future father-in-law's car as a result. The incident is what brings the hapless pair together and sets them on the road to marital perdition, bringing their future offspring with them. Marty going back in time to 1955 sets the stage for the offspring to make an attempt to redeem the progenitor, much like the biblical Jesus and Adam. 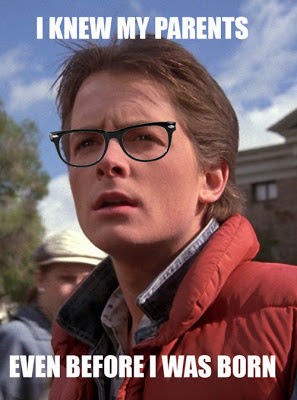 The comparisons go further. Marty faces a metaphorical death and resurrection no less than twice in the film. Once at the hands of Lorraine's father and again at the hands of Biff (who could be a Satan character) and his gang (the demons) who lock Marty in the trunk of the band's car.* The band, called "spooks" by Biff's gang, chases them away and aids Marty in his "resurrection" from the trunk, even though Marty has the keys (of death?) with him inside it.

Upon Marty's arrival into his parent's world he winds up in a barn surrounded by animals. The first people he meets think he's come down from outer space. One even suggests an incarnation of sorts ("It's already mutated into human form!") while another, Old Man Peabody (Herod?), tries to kill him, calling him a "space bastard".One more shot. Do you remember what Marty crashes into when he returns to 1985? It's a former movie theater converted into a church, which could perhaps be thought of as emblematic of how the movie itself was subverting the central message of the church. OK that one might be a bit of stretch, but it's still fun to speculate. Aside from this is the fact that "Jesus" is a favorite expletive of the character and is used by him at least six times in the film (with a "goddammit" thrown in for good measure).

George doesn't have the courage to ask Lorraine out, so first Marty tries to ask Lorraine out on George's behalf. Lorraine makes it clear that she thinks Marty is a better suitor. Next Marty pretends to be a powerful being from outer space and commands his father to ask Lorraine out upon threat of melting his brain. Even though the threatening commands of a powerful being from on high seem to motivate George, the effort doesn't transform George in any meaningful way and ultimately fails. Before Lorraine can even say "no" to George, Marty has already caused a scene with Biff leading Marty to perform even more miraculous feats and only further cementing Lorraine's infatuation with Marty, the very thing Marty was trying to avoid.

Marty's next attempt at substitution is to go ahead and take his mother out to the dance and try to set up George as a rescuer since Lorraine is clearly looking for a protector. Marty's plan fails as Lorraine realizes that he's not at all who she thought he was. Biff shows up and takes Marty out of the picture completely. Arriving late, George approaches the car expecting to see Marty. The film's most important scene follows:

Crispin Glover was the real star of this film, by the way.

This was the transformative event for George. Everything about his character hinged on this scene and Marty wasn't even there. That's the point. Nobody could help George but George.

Look at how on a practical level the whole scenario illustrates the problems that can result by inserting an idealized Christ-figure into a relational situation. Much like Jesus, Marty was this ideal protector, provider and "dreamboat" in Lorraine's mind. Someone like George could never hope to live up to that example and George knew it. As long as Marty was around, George could never get the chance to live up to his potential. But Marty was someone that both George and Lorraine had created. He was their offspring. Indeed his very existence depended upon them.

Paradise was not going to be restored through any of Marty's direct efforts. In the end, all he did was unwittingly put George in a position of adversity that allowed George to make the decision to be a better person and rise to the occasion. In this way Zemeckis has shown us, either intentionally or not, that substitionary atonement is flawed.** The best messiahs aren't the ones who rescue us by taking our place. What does such a messiah teach us? How does that transform us? In this regard, Marty McFly the unwitting Christ-figure, is a better messiah than Jesus.

Do you remember the next important scene in the film where Marty's very existence is threatened again? What song is playing?

It seems George didn't need a messiah from outer space after all.


*Just as an aside you can see how cars play a pivotal role in the film, whether it's the DeLorean that brings Marty back, Sam Baines' Chevy Bel-Air that hits George/Marty, Reginald's Cadillac that serves as Marty's "tomb" or Doc Browns '50 Packard that Biff tries to rape Lorraine in and outside of which George decks him. Most of the pivotal moments revolve around cars.

**Zemeckis hasn't done any favors for the notion of female empowerment. Lorraine's destiny is always at the whims of the male leads in the film (and indeed the entire trilogy) be it Marty, George or Biff. She was a product of the 1950's so I suppose we can let the filmmakers slide a bit.
Posted by The Apostate at 6/01/2013